Essay Question 7 from the 2012 CivPro Exam 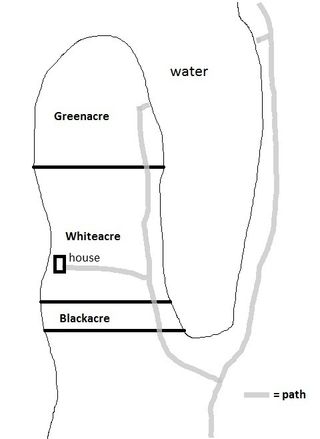 Husband and Wife jointly own Blackacre, which is undeveloped land. X, the owner of Greenacre, used to visit his property—also undeveloped—by boat, without crossing Blackacre or Whiteacre. Then X decided to build a cabin on Greenacre. In the course of this construction, he began using a path to Greenacre through Blackacre and Whiteacre. Husband sued X in ejectment from Blackacre. Wife knew about the litigation but, because she was angry with Husband at the time, did not join. It was determined by the court that X’s inability to get to his property in a commercially reasonable manner by boat entitled X to an easement through Blackacre. (An easement is a right to use another’s property for a particular purpose.)

Subsequently Y, the owner of Whiteacre, who had yet to engage in litigation about his property, died and left Husband and Wife Whiteacre in his will. Whiteacre is valuable developed property, with a four bedroom house. In a subsequent suit, Husband and Wife sued X in ejectment from Whiteacre. Wife also joined an action against X in ejectment from Blackacre. X claimed that Wife was precluded from relitigating X’s easement in Blackacre and that both Husband and Wife in their action concerning Whiteacre were precluded from relitigating the fact that he could not get to Greenacre in a commercially reasonable manner by boat. How should the court rule?

The following in italics would be an ideal answer:

Wife should be precluded from relitigating X’s easement in Blackacre, even though she was not a party to the earlier litigation. It is true that husbands and wives are not in privity with each other. Nor can one conclude simply from the fact that Husband and Wife are joint owners of Blackacre that they are therefore in privity. They share the same interest here (namely getting X off their land) but sharing the same interest is not enough for privity to exist.

[It was important to see that the mere fact that they shared an interest did not make them in privity. A and B, who were both harmed by D in a car accident, also share an interest in D’s being held negligent, but that does not mean that they are in privity. If A sues and it is found that D was not negligent, B is free to relitigate D’s negligence in a separate suit. The same is true about co-owners of property. Assume A and B are co-owners of property that is destroyed by C's act. A brings an action against C for his losses. A judgment against A does not preclude B from bringing an action for his losses against C.]

The reason Wife is precluded, however, has to do with the fact that in the absence of preclusion, X would be subject to inconsistent obligations. He already has the right to go on Blackacre as a result of his litigation with Husband, but if Wife is not precluded she could sue him in ejectment and win, which would mean he would be both permitted and forbidden from going on Blackacre. Furthermore, Wife – in addition to being a necessary party in this sense – knew about the litigation and failed to intervene. We spoke about such cases in which non-parties can be issue precluded in class.

So is Husband (and so Wife) precluded from relitigating the issue? I don’t think so. From what we can tell, Husband and Wife could not have foreseen that Y would give them Whiteacre, so it was not foreseeable that the issue would come up in subsequent litigation in which they were involved. Furthermore, Husband may not have had adequate incentive to litigate the issue vigorously in the first suit. Blackacre is undeveloped land that is much smaller and much less valuable that Whiteacre. Husband arguably would have put much more effort into litigating the issue had he known he would be the owner of Whiteacre in the future.  See the exceptions to issue preclusion in the Restatement (2d) of Judgments section 28.

The comments to this entry are closed.

What I am reading (for fun)

What I am listening to

What I Am Watching

What I Am Cooking